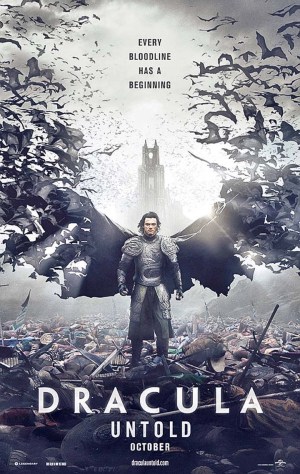 Now with more bats than Batman

Dracula Untold is a tale that should have stayed, well, untold.

The film, based on the life of the real Vlad the Impaler, is set in the 1460s, where Prince Vlad (Luke Evans) returns home from his impaling days to his wife and children, only to be ordered to provide 1,000 Transylvanian boys to serve in the Ottoman Army. Alas, Vlad doesn’t have an army to defend his kingdom. What to do? The obvious choice is, apparently, to wager with a creepy cave-dwelling vampire (who turns out to be Tywin Lannister from Game of Thrones) to gain his powers.

Unfortunately, Dracula Untold is confused about what kind of film it wants to be. On one level, it’s an awkward love story about Vlad as a family man. It’s also a war movie, although some of the imagery and cheap jump scares suggest that it might be attempting to be a horror film too. It’s also a tragic biopic : we know that despite Vlad’s best intentions, things aren’t going to work well for him. Oh, and there’s also a helpful etymology lesson on the origins of the word “Dracula” thrown in for good measure.

As a result, the film’s writing is laughably hokey, especially on the frequent occasions when it takes itself too seriously. Vlad’s not portrayed as a monster, but anything else with pointy canines is a threat that must be destroyed right away. Vampire clichés abound: they hiss at crucifixes, get flayed by the sun, and die on stakes (well, he is the Impaler), although are no cloves of garlic to be seen. The special effect with a swarm of CG bats is considerably impressive, but film logic means that those bats easily take out a full army in platemail without so much as anyone getting hantavirus.

Not surprisingly—and despite its attempts to depict Vlad’s family—the film is also extremely testosterone-driven: there’s only one instance in the entire 92-minute cheesefest of two women talking to each other, and even then it barely scrapes by on some variants of the Bechdel test (they’re talking about Vlad’s son). Still, the film limps along, cobbled together in Frankensteinish fashion, when it really should just be laid to rest.

Dracula Untold opens on October 10 in US cinemas.

One thought on “There’s bloodsucking and then there’s just… sucking: Review of Dracula Untold (2014)”