As any good GoT fan knows, the Sand Snakes are the bastard daughters of Oberyn Martell, who met his demise at the end of Season 4. After the death of their father at the hands of the Mountain, the oldest of the Sand Snakes, Obara, Nymeria and Tyene, take action to declare war in retribution.

A few days ago, Watchers on the Wall revealed the first images of the Sand Snakes on location in Seville. They have reportedly been filming a fight scene.

2. Why are their nipples on their chest armor?

(1) is reasonably easy to dispatch. It turns out that, in the image, some of the cast are stunt doubles, which is why they’re wearing the same thing. That partially explains it. But there are three Sand Snakes that the story focuses on, and even though they’re technically not in identical armor it’s still all pretty similar and might warrant confusion. Unless, of course, the fact that they use different weapons is their distinguishing factor.

But you’d think that after the bright robes we’d seen Oberyn Martell and Ellaria Sand wear in Season 4, the Sand Snakes would be in something more noticeable and fitting of their relation to the Martell family, than almost-identical brown outfits.

As for (2), I don’t know. There’s scientific evidence that having boobs on your armor could kill you, and in a pretty unpleasant manner:

Let’s say you even fall onto your boob-conscious armor. The divet separating each breast will dig into your chest, doing you injury. It might even break your breastbone. With a strong enough blow to the chest, it could fracture your sternum entirely, destroying your heart and lungs, instantly killing you.

So, the Sand Snakes’ armor gets a WTF for practicality. But on the aesthetics front, there’s also some obviously functionless and totally unnecessary nipples on the boob armor. What is up with that?

Nipples on armor aren’t anything new:

Let’s not talk about the codpiece now.

But the fact that the Sand Snakes have nipple armor seems inconsistent with how other women in the GoT are portrayed when they are in armor:

Consider Yara Greyjoy. She’s got armor she wears into combat, but there’s no nipples on it. She does give props to her house though, with that kraken detail on the breastplate.

Cersei Lannister isn’t an obvious candidate for women in armor in Westeros, but I guess as the Queen Regent she’s got to have some ceremonial stuff lying around. I guess this armored corset thing is nice for official business, but probably not too practical, especially if that’s the only piece of armor you’ve got on. (Sidenote: there’s a lovely analysis of Cersei’s wardrobe throughout the seasons here.) 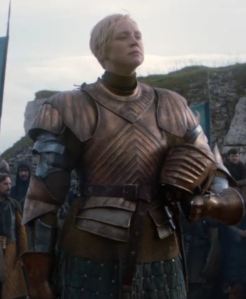 Gwendoline Christie as Brienne of Tarth

And then of course there’s Brienne of Tarth. The interesting thing about Brienne’s character is that she’s portrayed as the woman in the canon that’s experienced the most combat. She’s a fighter, first and foremost. In the book, she’s almost always in armor. In the HBO adaptation, she’s almost always in armor (with the exception of a few scenes, and even then I think we’re supposed to think that she feels SUPER awkward when she’s in a dress). But although she gets shit for being a woman who fights, Brienne’s armor is probably the most functional of the lot: no boob armor, no nipples.

So I’m not sure that there is any rhyme or reason to the nipples on Sand Snake armor. The best we have is a precedent for some boob armor, but not with nipples. Maybe nipples on armor is a Dornish thing, I don’t know. I guess the best explanation I can come up with is that it could be distracting to your enemies. If they’re so confused–like I am–by nipples on armor, maybe they can’t look anywhere else and then you’d get advantage in combat.