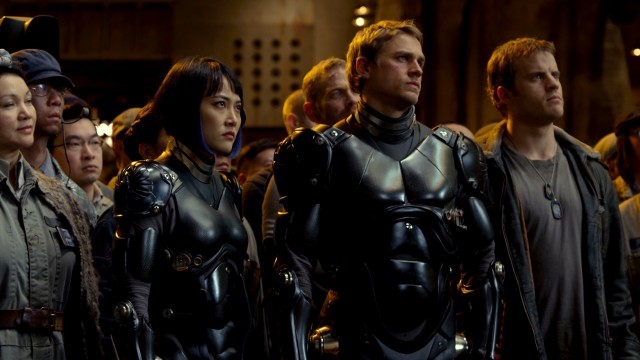 There’s not much I could love more in an action movie than giant robots and giant alien monsters, but in 2013 Pacific Rim brought me giant robotsfighting giant alien monsters. In a futuristic world, an underwater portal allows monsters known as Kaijus to rise from the sea and destroy coastal cities, so, naturally, humans operate giant robots called Jaegers to fight them. The film tells the tale of an international team of Jaeger pilots ending the conflict.

But that’s not all. Pacific Rim brought me Mako Mori. She’s one of my favorite female characters ever, not just because she’s a dynamic woman of color, but because she represents the possibility that there could be such characters in Hollywood. In this post, I’ll discuss how she’s unique as a character, and why her presence is important for film.

Mako Mori is a rarity. She’s literally a strong female character—in one of the film’s most iconic scenes,  Mako (played brilliantly by Rinko Kikuchi) faces off against the male protagonist, Raleigh Becket (Charlie Hunnam), in a martial arts duel. While there’s some trash talk by both parties, the fight is clearly a show of skill. Mako doesn’t have to prove her worth to Raleigh or win his approval. In fact, Raleigh is already aware of Mako’s reputation as a prodigy at the Jaeger Academy, and the scene ends when Mako comes out of their fight victorious.

But, unlike some other strong female characters, she’s not just about being tough and one of the (many) boys. Mako’s backstory means that she is the most prominently developed character in Pacific Rim. She’s experienced loss, she seeks revenge, and she desires validation by her adoptive father, Marshal Stacker Pentecost (Idris Elba). In flashbacks, we see that Mako lost her parents in a devastating Kaiju attack in Tokyo. She’s so haunted by the memory that when she recalls the attack in a Jaeger, it almost kills everyone when connected to her neural interface.

Mako is motivated by two main factors: a love for her family, and a desire to become a Jaeger pilot. However, Stacker’s protectiveness meant that he often denied her requests to become a pilot, much to her frustration. Mako’s story is simultaneously one about a woman who achieves her goals, and one about her struggle for independence.

Consequently, Mako is depicted as female without falling into common stereotypes in film. She’s obviously female, but she isn’t sexually objectified. She has weaknesses, but they aren’t tied to her gender. Nobody questions her ability to drive a robot on the basis of her being a woman. She’s seen as Raleigh’s equal: they pilot the Jaeger together, and she’s definitely not his (or anyone else’s) sidekick. It’s also her ambition that drives her character development, not a romantic story arc. In fact, insofar as Mako’s story revolves around a man, it’s about Stacker and their bond as father and daughter.

Mako Mori is also remarkable because her character inspired a new perspective on understanding female-friendly film. Traditionally, the tool for evaluating gender bias in film is the Bechdel Test, where film passes if:

However, despite its simplicity, more than half the films in Hollywood—including Pacific Rim—fall woefully short. Mako has a major role, but she doesn’t interact with another female character. In fact, of the entire 56-person cast, there were only two other women with onscreen roles, and they each had fewer than five lines.

That Pacific Rim fails the Bechdel Test has led some critics to dismiss it as sexist. However, this is too hasty. Sure, there aren’t women talking to each other (possibly attributed to their absence in the first place), but it still offers a wonderfully nuanced narrative about a female character. Further, it’s not clear that the Bechdel Test is a conclusive measure of sexism in film, although it is a useful tool for highlighting how gender is treated.

This discussion led to the development of the Mako Mori Test, where a film passes if:

To be clear, I don’t think that the Mako Mori Test supplants the Bechdel Test—optimally, they should be used together. However, from a feminist perspective, the depiction of Mako as having great strength of character without adopting any masculine behaviors demonstrates that there’s more to female-friendliness than simply having two women talking onscreen. After all, it’s empowering to see a female character who can have a multifaceted story arc, maintain traditionally feminine qualities without faulting them, and kick some ass at the same time.

Another notable feature of Mako’s character is that she’s the only a woman of color in Pacific Rim. It’s uncommon enough to have a woman of color—especially an Asian woman—in a leading role in Hollywood films, but it’s even rarer to see one when she’s not reduced to a hokey stereotype.

Mako is exceptional in this respect: she’s a well-written female character with a nonwestern background that informs her, but doesn’t become her. She’s got martial arts skills, but she’s not a ninja dragon lady. The fact that she’s portrayed with a full range of emotions—fear, pride, sorrow, relief and joy—demonstrates that she’s a real person, not just the film paying lip service to a diversity requirement. I can’t think of another female Asian film character fitting this description.

More generally, the world of Pacific Rim fares well in racial representation. Alongside Mako and Raleigh’s Jaeger, three other Jaegers are piloted by Russian, Chinese and Australian teams. The scientists and engineers are also multicultural, albeit predominantly male. There are at least four languages spoken, with Mako, Raleigh and Stacker all understanding Japanese and English. While the film primarily takes place in Hong Kong, the city’s racial and cultural diversity is shown, and it’s not overtly Orientalized.

Finally, the overall moral of Pacific Rim suggests that there’s more than just people of different backgrounds driving giant robots. The pilots don’t just tolerate each other; they actively have to overcome their differences to trust each other and work together for a greater cause. It would be lovely if Hollywood would take inspiration from this message, and I hope that Mako continues to make a strong appearance as the Pacific Rim franchisedevelops. Her character challenges the roles Asian women can have, and I am proud to have her represent me.

This piece was originally published on GeekGirlCon.