I’m not sure if this article should start with something like YOU DON’T SAY.

Prior to the launch of Assasin’s Creed Unity, Ubisoft made reviewers agree to an embargo time set 12 hours after the game went on sale on the east coast of the US. An embargo is an agreement between the press and the publisher about when coverage for the game can be released to the public. What this means is that, in theory, reviews can’t be published before the agreed time, which is usually prior to the game’s release, so players can see if they want to buy the game.

By setting the embargo time to AFTER the game was released, consumers didn’t have any information about the game’s quality before they dropped their cash on it. It also doesn’t help that the game is incredibly buggy. According to this BBC News article, players have been posting screenshots online of characters missing parts of their faces, hanging onto invisible ledges, and bending to QWOP-like proportions. 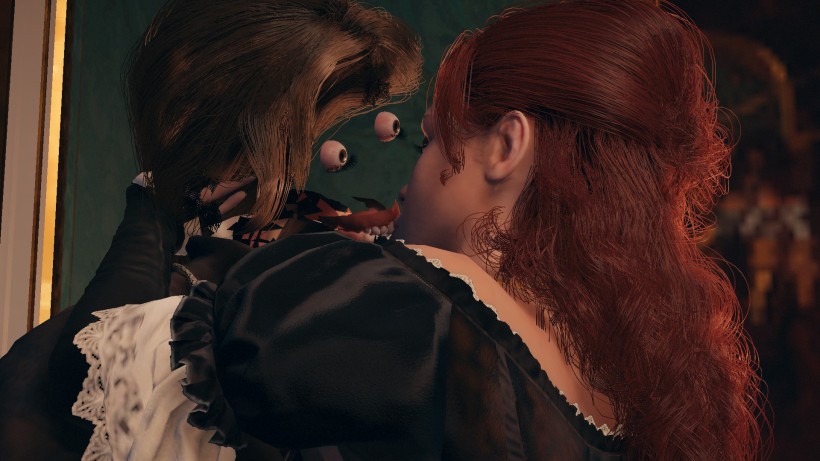 Okay, this shit is just terrifying.

As Ben Kuchera notes in his piece about embargoes:

Hey, guys, you know what? THIS IS ACTUALLY AN ISSUE ABOUT ETHICS IN JOURNALISM.

By restricting information about ACU, Ubisoft has released a game where consumers are walking into it blind. Sure, you know it’s about France and that there are no playable female characters. Sure, you know that there’s some weird time travel thing going on where you end up in World War 2. But as for what it’s actually like to play the thing? You’re putting money on a product whose gaming experience nobody has anything to say anything good (or bad) about yet.

And insofar as this is literally a case about a game publisher’s relationship with the press in a way that affects players, you’d think that Gamergaters would be all over this thing.

At the time of writing, this is what has been posted under the #Gamergate hashtag about Ubisoft on Twitter: 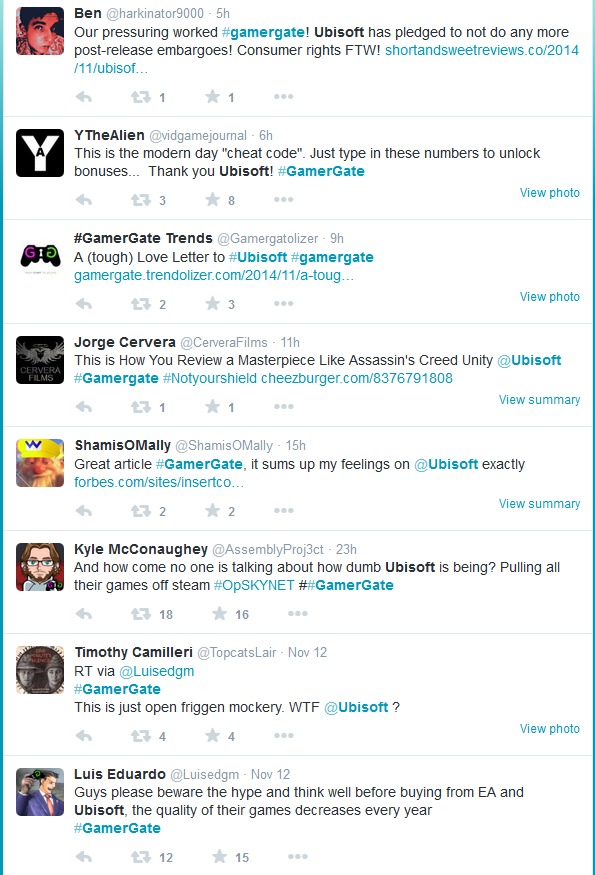 Interestingly, while there have been a few complaints (and some pisstakes) about the Ubisoft embargo under the #Gamergate hashtag on Twitter, this is a tiny drop in the ocean compared to the amount and degree of vitriol that women in gaming, such as Anita Sarkeesian, Zoe Quinn, Brianna Wu and others have received under the same hashtag. (I’m not linking to those posts here.) Notably, none of the tweets are about trying to rape or murder anyone at Ubisoft, either.

So, if Gamergate is really about ethics in journalism, where are the Gamergaters, then?

The logical explanation, whether you like it or not, is that Gamergate isn’t onto this (in the way that it was onto Sarkeesian et. al) because women are not involved. Given Gamergate’s propensity to spew sexist, hateful and otherwise inappropriate comments that detract from any legitimacy that it has a movement, it’s not a huge inference that there’s barely been a peep out of them in response to this royal clusterfuck. There simply aren’t any women to target.

That said, if Gamergaters really do want to complain about ethics in journalism, this would be wonderful time to actually start doing that. Ubisoft has already responded to the complaints about the shonkiness of ACU (and, to some extent the embargo). Of course, it might be time to adopt a new hashtag so that issues about ethics in game journalism and threats about raping and murdering women because they have an opinion on a video game get decoupled, once and for all.