“Is it too late to change the name?”

During Marvel’s Agent Carter this week, viewers were given the opportunity to see the first full-length trailer (as opposed to ant-sized, which premiered a few days earlier).

I know the Ant-Man comic has been around since the early 60s, but I’m a little bit cynical about the release. Remember how the Guardians of the Galaxy Honest Trailer basically said that Marvel was trolling everyone because we’d watch anything from them if they just slapped a big “Marvel” label on it?

Well, in a way, this smacks of something similar. Ant-Man’s one of the original Avengers, but we’ve never seen him before. Why? What are they setting this movie up for? Because it’s Marvel, it’s most likely that they will be setting the movie up for a sequel or three. Maybe he’ll join the Avengers at a later point–you know how all these Marvel tie-ins work. 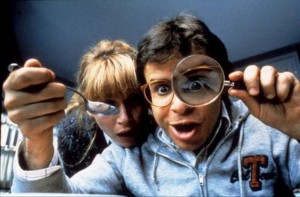 If you replace Rick Moranis with Bruce Banner or something, that sounds about right.

Still, I can’t say I am super excited about this. A superhero that shrinks down to the size of an ant can be handy for getting in and out of small spaces, but the shrinking power isn’t anything new these days. After all, there’s a generation of viewers who watched the Honey, I Shrunk the Kids movies as children, and although Ant-Man is probably not going to be battling lawnmowers and unintentionally-cannibalistic parents, the idea for a movie where you see the world from a miniscule perspective’s already been done. Also, then there was Microcosmos, which was a lovely French documentary showing in ant’s-eye view of the world in super-tiny zoomed-in detail.

But hey, if Marvel can get a movie with a talking raccoon and a tree with a one-liner to make box office sales, I’m sure this isn’t a worry for them at all.

The film will be released on July 17.