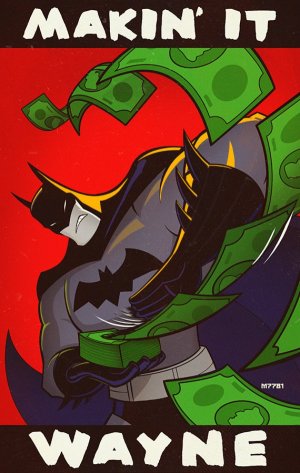 Or, maybe not. But soon, there will be a way to cash in on the intersection of DC comics and money. Loads and loads of money, that is.

According to Bloomberg, Time Warner (the parent company of DC) has licensed a casino company in Macau to create a new DC superhero-themed area as part of a casino called Studio City. Dubbed the Warner Bros. Family Entertainment Center, the 30,000 square foot facility will reportedly include several Batman-based rides, as well as incorporating fellow DC heroes like Superman, Wonder Woman and the Flash.

Macau, often dubbed the Las Vegas of Asia, is already well known for its casinos, which often mirror its Vegas counterparts. (For example there’s a Venetian in Macau, as well as a Macanese take on the MGM.) It in fact already generates seven times the revenue of Las Vegas.

The Studio City complex, however, will be the first of its kind and there’s no equivalent in Las Vegas yet. Along with the gambling floor, it will also feature a nightclub, a television broadcast studio and a 5,000-seat center for concerts, sports and theatrical events.

As for DC superhero-themed attractions, there will reportedly be a virtual reality Batman ride where you can fly around Gotham with Batman and fight bad guys, and ride in go-karts with Wonder Woman and the Flash.

The centerpiece, however, will be a 426 foot tall Ferris wheel that, according to the casino company, is inspired by the visual idea of “two asteroids shooting through a Gotham City building.”

The price tag? A mere 3.2 billion dollars. If this project is successful, the owners will probably make it back quite quickly, which brings me to this appropriately-timed image of the Joker: