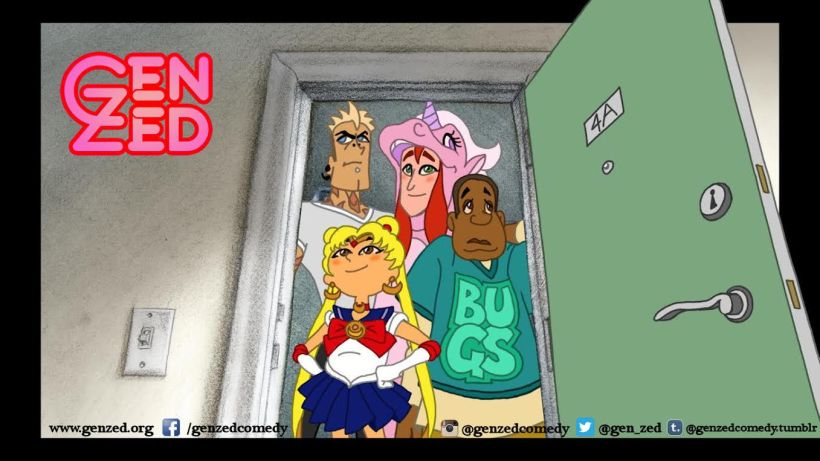 Hayden Black is a writer, voiceover artist and the creator of Hulu’s Goodnight Burbank. He’s also the creator, writer and director of Gen Zed, an animated comedy about the adventures of four Millennial housemates. What’s notable about Gen Zed is that it is the first animated series with a transgender actress in the lead role—it’s about time! Here, he gives us a bit of background on his upcoming show and the importance of diversity in the media.

Tell us a little about Gen Zed.

It’s an anarchic comedy about growing up whilst immersed in tech. About finding out who we are whilst drowning in choices. It’s also about understanding and accepting each other no matter who we are. So buried in all that punk is a totally hippy vibe.

What are the main characters in the show like?

Real. The one thing I hope separates us from other animated series is that while we might have similar flights of fancy, the people here are real. They’re beautiful, they’re ugly, they’re spiteful, they’re loving, they’re pieces of shit, they’re wonderful. Just like you and me.

What sorts of games do the characters like to play?

They favor a game I came up with for the show called Bugs. It involves defending various planets from these insectoid-aliens known as Bugs. It’s a combination of classic 3D arcade game and first-person shooter MMORPG. Who knows; maybe one day it’ll become a real thing. That would be so f’in cool if it did. Can you make that happen? You know people.

Why are they called Gen Zed?

Gen Y is both over-used and also it’s not quite who these kids are. They’re between 19-23, or as Shona (the transgender lead character) puts it, “The ass-end of Gen Y.” Obviously Gen Z is the next label that will be assigned by rote but again, I didn’t want to be that obvious. Being British, it didn’t take long to think of a work-around for that problem. In the story, Quillam (their online friend) gives them their name and he’s English. He’s also played by me. Coincidence? Probably.

The four main characters are all very different and represent a range of races, genders and gender orientation. Why do you think it’s important to show diversity on Gen Zed?

Why is it important not to? I want to reflect real life and besides, groups of white people are called Friends and that was the 90’s. This is 20 years later. This is Gen Zed.

Can you tell me a little about the show’s development? Why did you decide to do an animated series (instead of, for example, live action)?

It was originally written as a live-action script! My two main influences for this when I decided what I wanted to do were two British shows; The Young Ones and Spaced. Both those shows were prone to flights of fancy and I incorporated that out-there tone into the script. At some point, I was reading it and thinking, “This might actually make a good animated series.” And it sort of went from there. I actually changed nothing in the script itself. One minute it was a live-action series and the next it was animated. That’s why the characters can be so real; I didn’t write them as caricatures or cartoons. They could still easily be played live-action. Actually, that might make a good episode one day. Note to self…

One of the most notable points of Gen Zed is that it has a trans lead, for the first time ever(!!!) What do you think this show will do for trans voice actors?

Well, for one in particular, it will give her something to do when she’s bored! But I’m hoping the show will do a lot more for trans people than just trans voice actors. The voice I want to help give a platform to a part of society that’s been marginalized for too long. The timing is unbelievable because I’ve been working on a show with a trans character for a long while now and this is all coming to fruition at the same time Laverne Cox, Caitlyn Jenner, etc., are all rising to national prominence.

As for the timing of a trans lead, why do you think, generally speaking, the time is now for a greater transgender presence in the media?

First off, all thanks should go to the spectacular work of Orange Is the New Black and Transparent for lighting the touchpaper in a big way. With Caitlyn Jenner, Janet Mock and other amazing women pushing for acceptance coupled with the proliferation of gay marriage, I think America was finally ready to get to the T in LGBTQ. Next up will be the Q, I’m sure. Just think; 20 years from now, Grandma’s going to declare she’s genderqueer. Good for granny!

Do you think having an animated show with a transgender lead is different from having one in a live-action show?

On the one hand, in certain areas, animation is taken less seriously than live action so there might be. On the other, we’re aimed at Millennials who probably don’t care as much. You know, at the end of the day it’s so subjective. We just hope that the stories we tell and the way we tell them will appeal to people everywhere just as much as they would if it were live-action.

What can viewers expect to see on Gen Zed?

They can expect to see a very funny and moving show about four college-age kids doing college-age kids types of things. Playing games, producing online content, doing drugs, drinking, hating their landlord, etc.… and also making sense of shit and themselves. It’s pretty funny but most of all it’s got heart; there’ll be a few scenes here and there that will move some people to tears and that’s what’s going to set it apart from a lot of other stuff that’s out there.

How did you come up with the idea for Gen Zed?

It was a culmination of a few things but the catalyst was the dating scene.

I went out on a date with girl from OKCupid and she pointed out she had 300 unread messages on that app. It got me thinking that dating in the 21st century was turning into something else. Something so utterly disposable. It used to be special—but with 300 back up plans, who’s going to take anyone seriously anymore? My thoughts went from there—but that was the catalyst.

How has word of the show (or the trailer) been received so far?

The trailer is approaching 100,000 views and the trans lead is a real talking point on social media! Both the Huffington Post and the Advocate have also said some amazing things. And I think when people see the actual thing, they’ll be even happier.

What do you think Gen Zed will do for the future of gaming and representation?

I have absolutely no idea. I leave that one to anyone with a TARDIS.